On May 15th, Bakersfield College celebrated the commencement ceremony for its 2015 graduates, an event filled with all the pomp, circumstance, grandeur and spectacle you would expect in seeing more than 1,000 grads complete their arduous, but ultimately rewarding academic journeys.

And while it’s a lot of fun to watch hundreds of students and thousands of friends and family celebrate such a monumental day, it’s just as satisfying for me to attend the vast variety of smaller, yet no less significant ceremonies honoring sub-sets of our sprawling graduation class during this hectic season.  Bryan Hirayama did the photos which you can find at http://bakersfieldcollege.smugmug.com/2015-Delano-Commencement/

This May marked the 40th year that students were graduating from Bakersfield College’s Delano campus — and just as with the larger BC ceremony, it was with the same level of joy and pride that our executive team was on hand to watch 95 Delano students revel in their achievement at a pre-commencement celebration on this very special campus.

Most of those grads would also walk during the larger BC campus commencement later that night, but this joyous afternoon affair allowed those Delano students to congratulate each other and celebrate together in a more intimate, more familiar setting…..at the very same place they made their dreams come true.

With Rich McCrow, Director of the Delano Campus and BC’s Rural Initiatives, leading the ceremony and the spirited Mariachi Nuevo Grullense providing musical accompaniment, it was a fitting way to honor the hard work and dedication of those 95 students.

Even though the students were the focal point of the ceremony’s theme “A Celebration of Success,” that sentiment could also be applied to Delano and the campus as well. After celebrating the 100th anniversary of its incorporation two years ago, Delano continues into its second century as an agricultural hub, a hotbed of equality for farmworkers’ rights and one of the region’s true backbone communities.

And for the last four decades, Bakersfield College’s Delano campus has been furthering the city’s commitment to advancement through betterment of one’s self and the community around you. Since opening their doors in 1975, nearly 3,000 Delano students have earned their AA degrees, while another 1,300 have achieved professional certification.

I think I can safely speak for Rich and the rest of our BC leadership team at the ceremony — Anthony, Nan and Zav — when I say how privileged we all are to have contributed in ways great or small to the ongoing success of those new Delano grads.

They are a continuing testament to the amazing work being done 34 miles up the road.

Thanks to Rich and his incredible team for making this beautiful day happen.

Found this post in my draft folder.  So let’s look at a Delano Campus activity last spring.

Delano Campus’ 2014 Spring Tutoring Conference kicked off with breakfast from Jennie’s Café and a table-top discussion of personal tutoring experiences. After introductions, Dr. Oliver Rosales spoke to the students about what he sees as an invaluable service, peer tutoring. He also shared his personal experiences of working as a tutor, and he explained what he feels the tutors should focus on when tutoring his history students. Finally, Dr. Rosales took questions from the tutors.

Laura Kemph gave a presentation in which she shared with tutors how to change the settings in their BC email so that they could use their personal email account. Then Monica Huyck, the Tutor Coordinator, lead a teamwork activity.

After a break, and a group photo shoot, Trina Goree led the group in a diversity activity. This was followed by a presentation from Raji Rivera and Jake Galo, both BC graduates who are now attending CSUB. They spoke to the tutors about their experiences since transferring, gave advice, and answered questions.

Finally, Jesus Jimenez and Jasmine Gonzalez led the group in creating a poster made up of advice from tutors to future tutors as well as a pledge to help students in the future by lending a hand! 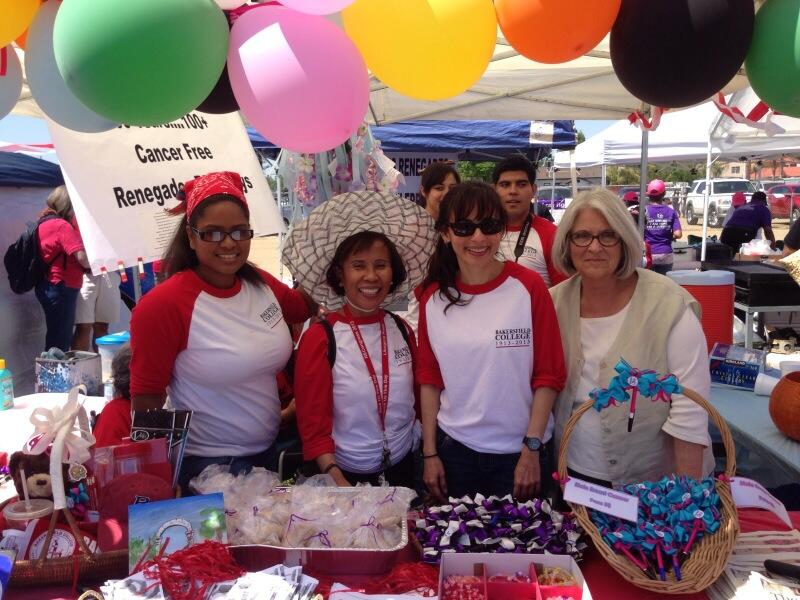 In Delano, the Relay for Life event raised more than $141,000 for cancer research, with our Delano Campus team raising $2,517! Team captain Krystal Vellido made the work enjoyable for participants, and coordinated a series of fundraisers to help the team surpass their $1,000 fundraising goal by more than $1,500! Go Gades at the BC Delano Campus!

Recently, math educators from all over north Kern gathered at Bakersfield College’s Delano Campus to discuss issues in math education. Jaime Astacio and Conor Whalen presented about the characteristics of Northern Kern Math students, and math instruction at Delano Campus.

Dr. Dave Youngs, Fresno Pacific University Mathematics Education Program Manager, was the special guest for the evening. Professor Youngs’ presentation was engaging.  It included a discussion about the current changes in K-12 math instruction in this country sprinkled with a poem and paintings by famous artists such as M.C. Escher.

There was a lot of energy, excitement and camaraderie. The night was a huge success and I thank Jaime, Conor, Juan, Raquel and Rich for organizing this event. Yes…Delano faculty and staff rock!

BC Featured: Delano Campus Art Instructor to be Visiting Sculptor

Our Delano Campus art instructor Cameron Brian has been selected to be a visiting sculptor at California State University, Bakersfield in 2014.

Cameron will be working with CSUB students and researching the history of camps around Weedpatch during Central California’s dust bowl era. The event is for “Proud to be an Okie: Celebrating 75 Years of The Grapes of Wrath'” and is sponsored by CSUB’s School of Arts and Humanities.

In addition to working with students, Cameron will build an accurately-represented miniature “Dust Bowl Era” encampment on the CSUB campus.

This blog site is not an official KCCD communication, and is not paid for with taxpayer funds.

Thank you to all faculty, staff, students, departments, and community members who contribute to the content.

The Kern CCD TALE Blog is a place for faculty and staff to share their tips on the future of teaching and learning.

The Jobs Demand Education blog shares approaches to workforce and economic development, with a goal of supporting economic mobility for our community while staying committed to the health of our people and the health of our environment.

In the Bhambi & Christian blog, Dr. Brijesh Bhambi join together joined together with the goal of facilitating healing and conversation in our community.